Check out this article in the Oklahoman.

http://newsok.com/antarctic-exploits-help-pay-the-bills-in-oklahoma-city/article/3364477
Posted by Craig at 4:26 AM No comments: 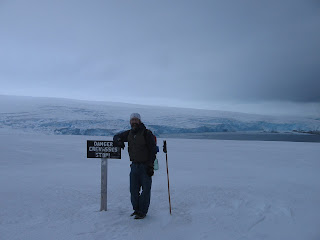 Today is Sunday April 19th. I would like to remind everyone that this is the 14th anniversary of the Oklahoma City Bombing. Please take a moment to remember and reflect.

Tom (my on ice supervisor) and I decided to take a hike up the glacier today. After getting settled into a good week of work without to many distraction it was time for a break. The hike to the top is only about 20 min if you don't stop to look around, which we did a lot of. We still don't have much snow so there was a lot of ice to walk on but we did so without incident. We saw some great views from the top. 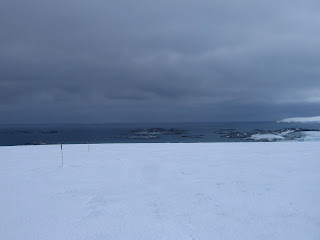 This week we have GSAR training (glacier search and rescue). Hope to have some good pictures from that

More Phots of the hike on the Picasa web site
Posted by Craig at 1:11 PM No comments: 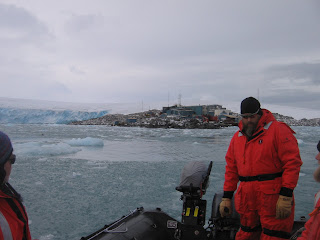 We had our first two day weekend since arriving here. (we normally work a 54 hour, 6 day week but what else is there to do). The days are getting shorter so taking advantage of time off during the day is important. We will never have the full 24 hour darkness I had at Pole but we will have some very short days. A group of us decided to do some rec boating on Saturday. We geared up in float coats and water proof pants and put a zodiac in the water. The morning had brought a lot of brash ice into the harbor area. This is chunks of ice mostly from the glacier as it calves off hunks into the water. We ventured out slowly until we cleared the ice. We decided to visit two of the near by islands that are not off limits. One called Jacobs Island was at the outer limits of the boating area which is about 2 miles from station.

We hiked around seeing great views and stumbled across some fur seals. 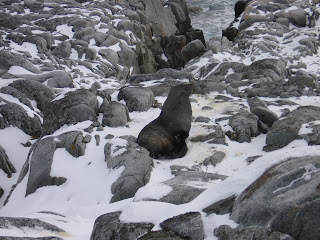 They sound kinda like dogs growling and are quite nimble even onshore. After a while we decided to head to Deluca Island and a giant Pectrol nest. On the way we slid by the wreckage of a ship (that I can't recall the name of) that sunk here 15 or 20 years ago. It's a 400 ft boat and only 50 ft or so is visible. 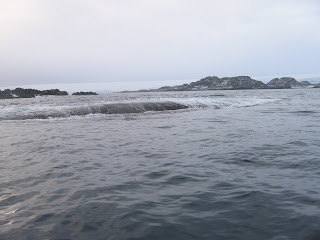 I'm told on a calm day you can see the props in the water. After seeing the baby giant Pectrol we headed back to station passing a raft of Penguins on the way. The are very graceful when they swim. We got back just in time for a nap then hamburgers on the grill. Played poker with a group that evening and lasted 2 hours before dropping out. 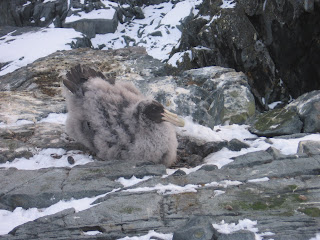 Sunday was a short work day (about 2 hours) then relax.

Don't forget to check the Picasaweb site for more photos
Posted by Craig at 5:11 PM No comments:

I've been on station now for about a week. There has been huge amounts of training and "turnover" which is learning you job from the person leaving your job. Today we spent 4 hours in a Zodiac boat learning how to navigate, drive and communicate with the base. We also did "man overboard" drills. We actually had several folks get in the freezing water(in special suits) and then rescued them. I hope to have some pictures of this stuff soon. I need to learn to carry my camera with me more often. I am constantly seeing the glacier calf huge chunks of ice but never have the camera. I will try to do better.
Posted by Craig at 4:50 PM No comments:

I know, a long time between posts. After a full day in Punta Arenas and a night of very interesting bar hoIpping we collected our ECW gear and readied for the boat ride. A good smooth start on the Straights of Magellan.

We have been without internet access since leaving port Saturday afternoon 21 March. We are sailing on the L M Gould, one of 2 Antarctic research vessels. We got word of “ridiculously high” waves in the Drake so it was decided to stay in the lea of South America until things got better. We spent almost 2 days going back and forth on a 25 mile pattern. Then we shot south between t storms. It was a rough crossing just the same. I have never experienced 35' waves and don't really want to do it again. At time the boat was listing 30 to 35 degrees as it rode the waves. We spent 2 days in that shite. I never got sick but felt bad enough to take a pill.. I will attach some rough video taken from the bridge. Notice how Fitz (the food inspector) leans with the boat. The waves had calmed some at this point.
(unable to post the video but check it out on the picasa link on the right)

We broke through the bad weather on the 26th and arrived at Deception Island, our first science stop. Some of the techs are studying the fungi here. Mainly detecting new fungi and seeing how it effects the attempts to preserve the historical remains here. There are whaling stations from the late1800's and ruminants of early exploration. This is still an active volcano with visible geothermal springs. Some of the crew dug in the sand and made “hot tubs” to soak in. Many did a lot of hiking around playing tourist.

The time on the boat has been filled with movies, books and episodes of Lost and Weeds. Weed is a Showtime series that is worth the rental . The food on the boat is great and plentiful although some saw it two or three times during the high seas. I spent some time on the bridge and received the engine room tour.

Our weather bad luck continued as we got stuck in Deception Island during a day long storm. It delayed us due to the small narrow entry to the cauldron. We could have easily been swept into the rocks trying to get out. Our captians name was Joe so we decided to watch “Joe vs the Volcano” in his honor.

Finally on our way south for about 24 hours of sailing down the inland passage of the peninsula to Anvers Island and Palmer station. We had an uneventful docking and now am getting settled in.